Similar to the large-scale protests in Turkey prompting a San Francisco solidarity rally a few weeks ago, the recent multi-city Brazilian protests motivated some to organize a San Francisco solidarity rally with the Brazilian protests today.
The rally started at 6pm at Justin Herman / Bradley Manning plaza.  Protesters held up signs, took photos of each other, chanted and sung songs.  Most of the event seemed to be conducted in Portuguese. There was at least one brief speech, but the PA system didn't carry the sound too far.


There didn’t seem to be any single Twitter hashtag for the San Francisco event, but tags for the Brazilian protests in general are: #OGiganteAcordou #CHANGEBRAZIL #ProtestaBrasil #OBRASILACORDOU

The call for the protest follows:

Brazil is currently experiencing a widespread collapse of its infrastructure. There are problems with ports, airports, public transport, health and education. Brazil is not a poor country and the tax rates are extremely high. Brazilians see no reason to have such bad infrastructure when there is so much wealth that is so highly taxed. In the state capitals people spend up to four hours per day in traffic, either in their cars or on crowded public transport which is of very poor quality.

The protests are not mere isolated, unionized movements or extreme left riots, as some of the Brazilian press says. It is not a teenage rebellion. It is the uprising of the most intellectualized portion of society who wants to put a stop to these Brazilian issues. The young national mid-class, which has always been unsatisfied with the political oblivion, has now "awaken" - in the words of the protesters." (please read the full article here:http://ireport.cnn.com/docs/DOC-988431)

So we, the brazilians who live outside of Brazil would like to invite everyone (brazilians, americans, etc!) to this protest in order to support our friends who have been unfairly arrested, who haven't had their basic rights to protest against a corrupted government. And on top of that we also would like to show the world the problems that our country is facing.

Please invite your friends, spread the word and join us in solidarity to the oppression that has been going on in Brazil! 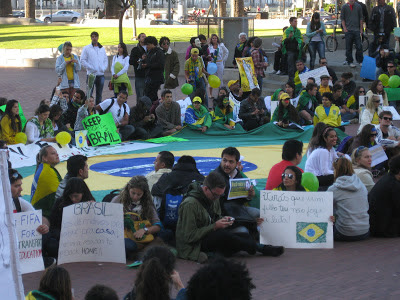 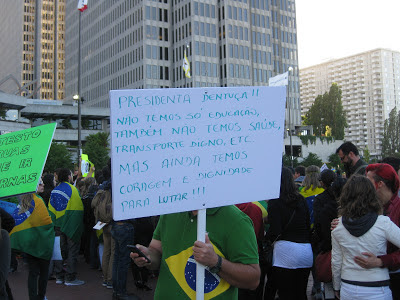 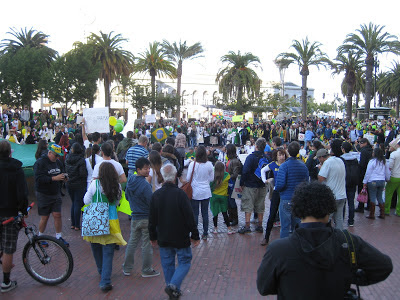 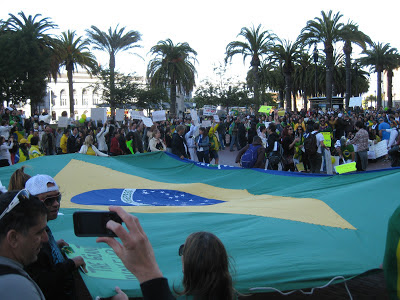 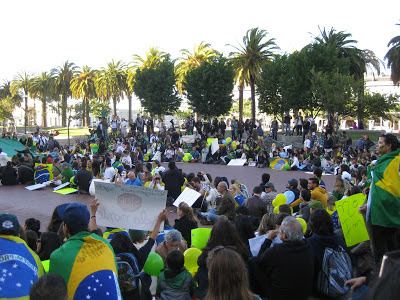 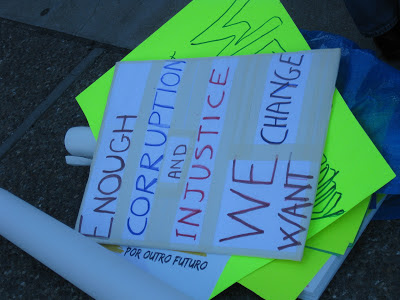 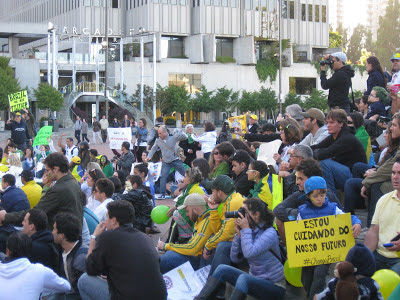 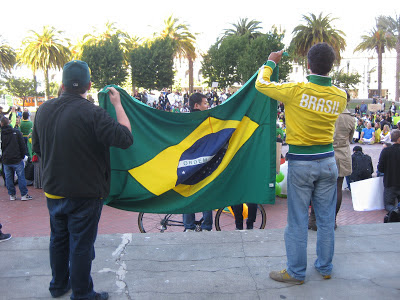 The very visible billboard on the corner of Mission and Cesar Chavez streets is wonderful because it invariably gets graffiti sprayed all over it mocking the ridiculousness and offensiveness of the advertisement.

The beer ad says (in Spanish): "It is easy to be a man with character."

The graffiti says (in Spanish): "The people do not believe in this."


Posted by Danny Colligan at 1:55 PM No comments:

The First Watergate Law of American Politics states: "No matter how paranoid or conspiracy-minded you are, what the government is actually doing is worse than you imagine."

The Second Watergate Law of American Politics states: "Don't believe anything until it's been officially denied."

Both laws are still on the books.

Blum’s dictums are as accurate and necessary for understanding corporate power as they are political power.  With that in mind, dear reader, let us proceed to consider the likelihood of various Silicon Valley corporations’ denials that they are involved in the mysterious National Security Agency PRISM program.

First, some brief background.  Journalist (or, according to the New York Times, “blogger”) Glenn Greenwald has been breaking a series of exclusive stories about the nature of the NSA’s top secret programs in the past week.  First, he broke the news that a Verizon, at the behest of the Obama administration via a secret Foreign Intelligence Surveillance Court order, had been forking over the metadata of millions of subscribers’ phone calls to the NSA.  Next, he disclosed the existence of the PRISM project, a secret collaboration between various Silicon Valley corporations and the NSA to analyze user data stored on the companies’ systems.  After that, he published about Obama’s order to draw up a list of foreign targets for cyber attack and about another NSA tracking program, Boundless Informant.

Here I want to focus on the PRISM revelation only.  The reaction of the leaders of the corporations with whom the NSA had been allegedly collaborating was shock, outrage and denial.  Google CEO Larry Page co-authored a blog post with Google’s top lawyer entitled “What the...?” in which the authors claimed that “Any suggestion that Google is disclosing information about our users’ Internet activity on such a scale is completely false.”  Facebook CEO Mark Zuckerberg followed suit with a response to what he called the “outrageous press reports” that read very similarly to Page’s.  Indeed, according to the Guardian, the newspaper which Greenwald writes for, “All the companies involved have now denied knowledge of [PRISM].”

Naturally, these carefully-written denials don’t directly address all the alleged issues and are open to wide interpretation.  Most notably, the companies deny the NSA having “direct access” to their servers, which begs the question of what “direct access” is, exactly, and doesn’t preclude the possibility of indirect access.

So the NSA can’t both be collaborating and not collaborating with the companies.  Someone is in the wrong, either Glenn Greenwald or the Silicon Valley corporations.

Unfortunately for Facebook and Google, et al, evidence seems to be mounting on the side of their collaboration with the NSA.  According to the Washington Post, “Executives at some of the participating companies, who spoke on the condition of anonymity, acknowledged [PRISM]’s existence and said it was used to share information about foreign customers with the NSA and other parts of the nation’s intelligence community.”  Furthermore, the Guardian has published additional evidence about PRISM and several other news sources corroborate Greenwald’s original accusations.  Greenwald doesn’t appear to be finished, either, hinting that more incriminating stories are yet to be published.

It seems pretty clear, and I believe the evidence will bear this out as time goes on, that Mark Zuckerberg, Larry Page and the rest of the Silicon Valley titans are lying.  There are, of course, less likely alternate possibilities: that the executives are so misinformed that they don’t know what is going on at their own companies, for instance.  But I agree with security expert Bruce Schneier when he says: "I was assuming that these tech companies were just lying... That's the most obvious explanation."


George Packer recently wrote a piece -- “Change the World” -- in the New Yorker about Silicon Valley, partially addressing its corporations’ increasing involvement in politics.  Towards the end, he observes, “If Silicon Valley’s idea of itself as a force for irresistible progress is running up against the unlovely reality of current American politics, that isn’t necessarily a bad thing.”  In the context of industry collaboration with secretive government surveillance programs, one might add, “And long overdue.”  Although Packer clearly didn’t have the presently breaking scandals in mind, it’s clear that the power of these companies to engage in such nefarious and possibly illegal activity should be reined in, as quickly and as strongly as possible.
Posted by Danny Colligan at 10:59 AM 1 comment:

Supporters of the ongoing protests regarding the planned destruction of Taksim Gezi Park in Turkey staged a rally in San Francisco today.  The event in front of City Hall was well attended (several hundred people), well organized and the attendees displayed great enthusiasm for their cause.  This protest had perhaps the greatest sign density of any protest I’ve ever seen.

Signs varied greatly in content from “Enough with Erdogan’s Advanced Fascism” to Turkish flags and pictures of Mustafa Kemal Atatürk (Turkey’s first president and a symbol of secular, modern Turkey).
The rally, in both signs and speeches, was conducted mostly in Turkish.  There were some English signs and speeches.  The speakers denounced the brutality of the police and praised the Turks defending the park.  One fiery speaker insisted that Turkey never had a democracy, since Turkey has always been under the thumb of America and NATO. Another speaker encouraged attendees to educate the crowd's non-Turkish friends about the issues at hand.
Attendees were mostly Turkish, unsurprisingly. All ages were present, from the elderly to moms with baby strollers.

The call for the rally follows: 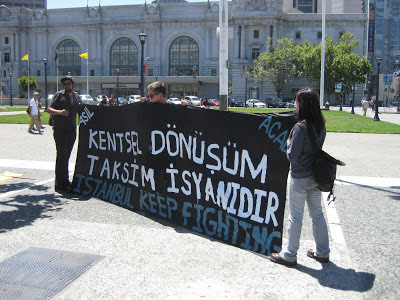 "To All Democracy and Free Speech Supporters in the World,

There is an ongoing public uprising in Turkey which one might call as the Turkish Spring against the anti-democratic regulations of the current government. The uprising was sparked by a police attack against peaceful protestors in Taksim, Istanbul who were gathered in a public park (Gezi Park) to protest the planned shopping mall construction by removal of the park, one of the few remaining green areas in downtown Istanbul. The peaceful sit-in protestors who were in the area since beginning of the week were attacked by the police forces on Friday May 31, 2013 around 5 am by tear gas and water cannons without any warning. These protestors were just ordinary people who were there to save trees from being toppled down by bulldozers, to voice their opinions about the fate of their city by exercising their constitutional right to a peaceful demonstration. The unnecessary and excessive use of police force against demonstrators and non-demonstrators alike in the area have caused an outrage among the public drawing more crowds to Taksim area. 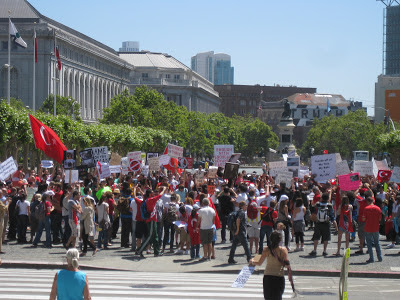 Ongoing police brutality and reports of injuries sparked even more protests all over Istanbul and spread to other cities turning into country wide demonstrations against Prime Minister Tayyip Erdogan and his "increasingly authoritarian and uncompromising tendencies" as Associated Press has called it. In many cities, people from all parts of the society, believers, non-believers, different ethnic backgrounds, different party voters have gathered on the streets demanding the police violence against public to come to an end and chanting for Mr. Erdogan's resignation. 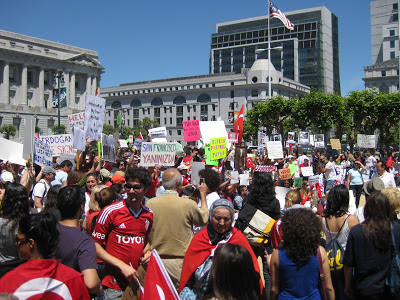 The major media either supporter of the government or oppressed by the government is turning a blind eye on the developments. The main source of communication is basically the social media such as facebook, twitter and civil people broadcasting from the streets to various sites using their cell phones. People of Turkey is reading reports or watching videos about what is going on in their country from international press coverage due to lack of local media reports. There is also growing concern among the public that internet access will be banned by the government.

Please us help to spread the outcry of public in Turkey to stop the police violence against public and anti-democratic regulations. 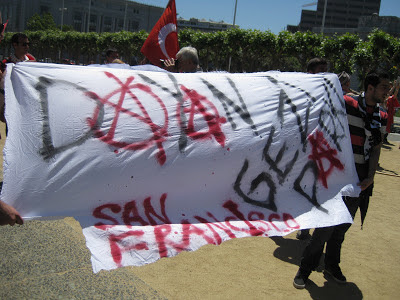 So far, 51 people are arrested, there are many injured protesters in hospital, one being in a coma.

We, the Turkish Americans living in the Bay Area, are gathered to show our support to the protesters in Istanbul, and let them know that they are not alone. Their efforts are noble and even though we can't physically be there, our hearts and minds are with them.

We hope that those in power would yield to public demand and would leave the trees of Gezi Parki alone, so the city residents can continue to enjoy the park. 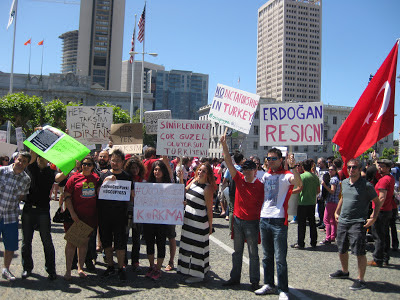 Hashtag for the event: #occupygezisf
Posted by Danny Colligan at 1:40 PM 3 comments:

A mostly dormant blog I post thoughts on from time to time. Enjoy.